In Japanese, particles are used to mark different parts of a sentence.
Particles “は” (ha) and “が” (ga): The particle “は” indicates the topic of the sentence, and the particle “が” indicates the subject of the sentence.
In the example,
「わたしはあなたがどこにすんでいるかしっています。」
Watashi wa anata ga doko ni sundeiruka sitte imasu”
(I know where you live),
“I” is the topic, and “you” is the subject.
Not all Japanese sentences have both a topic and a subject, and topics are often implied in Japanese (for example, “I” (Watashi) is implied because I am speaking. Therefore it is excluded from this sentence I am someone who knows where you live).
Particle “o” (o): The particle “o” (or “o”) indicates the direct object of a Japanese sentence. In the example, “わたしはかのじょのいえにつれていきます。Watashi wa kanojyo wo ine ni turete ikimasu.” (I take her home), “she” is the direct object.
Particle “ni”: The particle “ni” can be used to mark the direction, time, or indirect object of a Japanese sentence.
An example of a directional marker can be found in the previous example “わたしはかのじょのいえにつれていきます。”(I take her home). In this case,” “ni” works like “to”-“I take her home”. The particle “e” can also be used this way, but usually not in a specific place. , Means a more general direction.
The particle “ni” is also used to indicate the time of a Japanese sentence. For example, “わたしは３じにでかけます。Watashi wa 3 ji ni kaerimasu.”(I’m leaving at 3 o’clock.)
The final use of the particle “ni” in Japanese grammar is an indirect object marker. In the example, “わたしはかれにつれていかれた。Watashi wa kare ni tsurete ikareta.”(I was taken to him.), “he” is an indirect object.

Reference from the Japan Foundation

Check the subtitles of Japanese propositions

You may be surprised to learn that language learning can be an exciting adventure.

Please don’t miss out on these changes that will surely happen to you. Let’s make your life a wonderful journey with our Japanese language tutors! 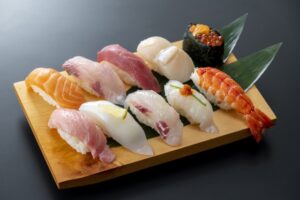 If you visit Japan as a tourist, you must try “sushi. There are many “sushi” restaurants around the world, but 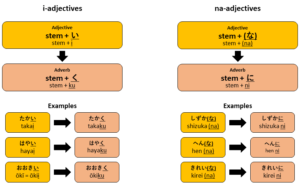 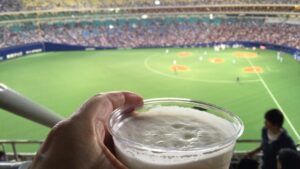 Popular Sports to Watch in Japan

There are many countries where sports are popular, but “popular sports” differ from country to country. For example, American football 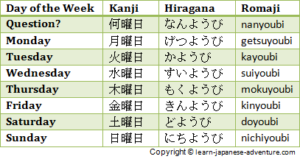 Numbers, Time, and Days of the Week -数字、時刻、および曜日 –

Japanese numbers, time, days of the week, etc. Before we get too much further into Japanese grammar and verb conjugation,